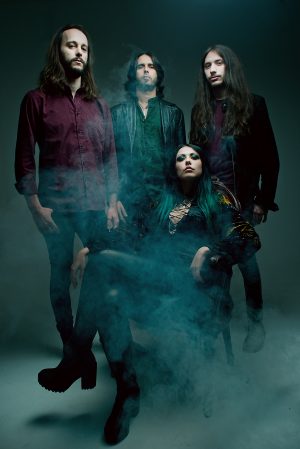 Black Sabbath, Led Zeppelin, Jefferson Airplane, Free, The Faces, “but, at the same time Donny Hathaway, Howlin’ Wolf, Dina Washington, Big Mama Thornton and Muddy Waters. Those are the one who taught me a lot of things about music.”
That is the leap-off point into discussing ‘The Vision’, the debut album by Italian doominatrix Virginia Monti and her band Psychedelic Witchcraft. Fronted by the bewitching Monti, the only one in the band that “isn’t classically trained”, this Florence-based blues rock group were only formed a year ago but have already played with the likes of The Vintage Caravan and Dead Lord and have been snapped up by Soulseller Records (Spectral Haze/Demon Eye) for their debut album.

“I started alone, just for fun, posting a song on YouTube,” says Monti of how the band begun. “I wouldn’t have ever imagined the reaction the metal community had. I had so many people asking for more! It took me almost six months to find my bandmates because I was looking for guys that shared the vision of style and music I had in mind. I found was my guitar player [Jacopo Fallai]in my hometown, then I met Riccardo [Giuffrè, bass] in Milan and he moved to Florence to join the band. Those are basically the two hearts of the band for me. We found an amazing drummer, Mirko Buia, that came from Sardinia to join the band.”

Telling Iron Fist that she is a trained actress and used “to sing jazz and blues in clubs here in Florence” Monti is a self-taught singer but you wouldn’t know that from the (witch)craft pouring out of the doom-laden debut. “I learned to play guitar two years ago and since then I started to write my own songs,” she also admits. “You can feel the bluesy vibes! Those are my roots. Many people expected the album to be heavier and much more doom sounding but that wasn’t what I was looking for. I wanted a powerful rock sound based on blues, that’s it. The record is clearly inspired by bands like.”

One band she clearly loves is Coven, something she is not afraid to confirm. “I discovered Coven years and years ago thanks to an ex. If you love the occult you can only be inspired by them. Jinx [Dawson] is the first lady of occult rock. However, I feel the inspiration from Coven doesn’t match the music as much as the mood and the imagery of Psychedelic Witchcraft. I’ve been inspired more by bands like Osanna, Circus 2000 and, of course, Goblin. Most of all, I’ve been inspired by Italian horror movie directors, especially Dario Argento, Mario Bava and Lucio Fulci.”

Revealing that the occult runs through Psychedelic Witchcraft, Monti insists that “Everybody knows Italy is a strong Catholic country but I respect every religion actually. Our lyrics are not influenced by the place I live. Everything is just spontaneous and natural, as it comes to Us. I’ve been raised around witchcraft; my mum used to buy me books about the occult, Tarot and witchcraft. I studied the occult since I was a little girl and it became part of me. To me, the real magic is the music: having the chance to take something that really haunts me inside, morph it into something other and then finding people who actually connect to the feelings I express. What’s more magical than this?”

Now with a vehicle to express her fierce, spiritual being through song Monti says that Psychedelic Witchcraft has allowed her to “Wild and free. I’m honest and I live everyday without looking back at the past. Always tell the truth because that’s what I am.”

Of future plans she is bristling with ideas and ambition: “Having this album out is already a big thing for us. We want to keep going, playing shows, go on tour. We’re already working and recording for the second album. ‘The Vision’ is the first part of a series of four. These four represent the elements: air, fire, water, earth. ‘The Vision’ is the fire, the passion, the energy, the strong will. So the others will represent other aspect of the elements. The main objective is to complete the series, releasing one album per year. What can we say, We try to live the best of this dream until it lasts.”