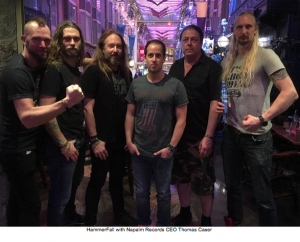 One of the favourites of the Iron Fist stereo and saviours of the steel in the low late ’90s and early 2000s, this is great news for the future of the ‘Fall. Their singer Joacim Cans said: “After two exciting decades in the line of metal duty I feel that signing with Napalm Records is the necessary step we need to take in order to grow as a band and reach the next level. Even though we’ve been around for such a long time we are still hungry and craving for more. There are still territories left to conquer and metal hymns left to write.”

Guitarist Oscar Dronjak added: “HammerFall has been very successful and happy with Nuclear Blast for almost 20 years, but in order for us to continue to grow as a band and reach new heights we needed a fresh challenge. This felt like a right and necessary step at this point in our careers, in order to keep moving forward and upward at a high speed. We view this label change as an opportunity to create something special, and firmly believe our best times are still ahead of us. That’s why we’re very, very excited to work with the people at Napalm Records for our upcoming, 10th studio album!”