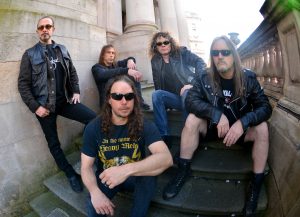 Their debut full-length ‘Feel The Fire’ came out in 1985 and subsequent albums ‘Taking Over’ [1987] and ‘Under The Influence’ [1988] helped lay down the thrash metal template. They may not have been Big Four but they were influential none the less. When thrash metal started to enjoy a resurgence in the mid-2000s thanks to younger bands obsessed with the speed and aggression of these elder statesmen, the rock music magazines were quick to hail Overkill’s earlier albums as well as their “comeback” albums – ‘Immortalis’ [2007], ‘Ironbound’ [2010], ‘Electric Age’ [2012] and ‘White Devil Armory’ [2014] – when in fact, they had, stubbornly, never gone away. As the band set about to remind their fans – old and new – that they released no less than six full-length albums during the dark days for metal of 1995-2005 – as well as two live albums, a covers album (cleverly called ‘Coverkill’) and a ‘best of’ – via their ‘Historikill: 1995-2007’ boxset (also including ‘Immortalis’ for luck) we wanted to interrogate formidable frontman Bobby Blitz on how he survived these years of decay.

“First, the thing that makes me so proud about Overkill is its relevance in the current day,” he begins on the impetus behind the behemoth boxset. “There’s nothing wrong with history. You need to know where you’ve come from to know where you’re going. What makes this ‘Historikill’ thing unique, it highlights an era that was a little bit darker for metal as a whole. We went from speed to heroin addiction, that was how it seemed, but the point is, when you look at ‘Historikill’ it shows that those days were not as dark as most people think. Many of my contemporaries went home, and Overkill said, ‘If we don’t answer the call to go home then we won’t have to’. It was either persistence or stupidity. People say, ‘Feel The Fire’ is my favourite, sure, I get that, those were really fruitful times but that doesn’t mean that those releases that happened post that era had any less value, any less impact. It was a simple process for us; do what we love doing, do it at a high level, just because it’s harder doesn’t mean it’s not as valuable and this is what you find in ‘Historikill’.”

The band, who at one time boasted Anthrax’s Dan Spitz in their ranks, had a track on Metal Blade’s legendary ‘Metal Massacre’ series, caught the eye of the powerhouse thrash stable Megaforce Records and were one of the first thrash bands to sign to a major, in their case, Atlantic, for 1988’s ‘Under The Influence’. After the more Black Sabbath inspired curveball of ‘I Hear Black’ in 1993 they were unceremoniously dropped and it was a German label, Edel, that picked them up and dusted them down for the 1995 ‘Wrecking Your Neck’ live album. Blitz has a theory about this. “To some degree it’s a German trait, not just with metal. It’s a country that has a lot of tradition,” he says. “They hold on to their loves like grim death, they don’t dispose of something and heavy metal was one of those things. It’s funny, people always think that it’s the only place to have done it in the ’90s though, but we were doing bigger shows in the ’90s in the US and I think the reason was the room wasn’t crowded anymore. What had a 100 touring bands in it in 1994, by ’97 there were ten, and people had a hell of lot less choice.”

But when asked if, despite the grim days for heavy metal, did he prefer it then to the equally frustrating present day of illegal downloading and low record sales he says, “We’ve done our first Australian tour, we’ve recently been invited to South Africa, we’re back in the UK at a much higher level, we’re not just doing Germany but all the surrounding countries in Western Europe, we’ve done our first Scandinavian tour, so I think that right now, if you weigh everything out there is much more opportunity because the old bands are still desired by concert goers, even if not CD buyers.”

It seems though that Nuclear Blast, arguably the biggest heavy metal label on the planet, with a finger on the pulse when it comes to new bands and a ferocious appetite when it comes to snapping up the old guard (they now have Slayer, Anthrax, Testament and Exodus on their books) have faith in the physical sales of Overkill records as they’ve put their heart into ‘Historkill’, a giant 11-CD boxset.

“The beauty of this label,” Blitz gushes, “is that you’re still talking to a guy in a Death Angel t-shirt. I remember sitting in the office of Atlantic, cigar in the ashtray, and the guy’s in a three-piece $1000 suit, explaining promotion to me. When you’re dealing with a guy who goes to a 100 shows a year you know you’re gonna be understood. I love the fact that they have power over at Nuclear Blast but I also like that they’re personable, so it becomes the best of both worlds.”

But this is still an era where at one-click on Youtube we can stream ‘Necroshine’ or ‘Killbox 13’, why this boxset and why now? 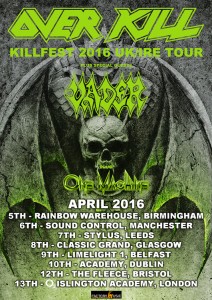 “There’s things that are on the boxset specifically,” Blitz insists. “There are demos from the early days, there are covers songs, it’s quite a different approach when it comes to owning the entire package, and I think that Nuclear Blast, one of the things they’ve done is to reinvent themselves. The idea about being able to survive in 2015, when really most music is given away, they understand that the metal fan is a collector and that’s what you’re dealing with, the history of a band like Overkill but also a label that understands how to present that history to the fans. It’s for the die-hard Overkill fan but beyond that I think the youngsters in the scene that have been exposed to the early blueprint of metal, whether that be ‘Kill Em All’ or ‘Bonded By Blood’ but also exposed, for Overkill, post-‘Ironbound’, what this does is give them the opportunity to experience a whole decade plus of what was happening when the light was not shining favourably, not just on us, but the whole scene and to be able to catch up right then and there.

“There’s something to be said for us old guys and I think the beauty is, we’re playing in a genre that should be a young man’s game. Some of the younger bands, they do have something to offer and I think it makes an older guy like me a little bit more comfortable with passing the flag over, so this is for them.”