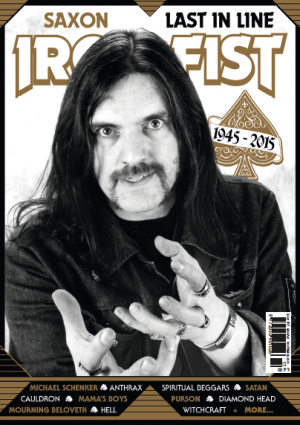 Doing a new issue of Iron Fist felt meaningless; we were named after a Motörhead song and now Motörhead was no more. While every other magazine poured over the details of Lemmy’s life, we wanted to mourn the band as well as the man and through our haze turned to the only person we could think of, Jase Of Spades from the blog 366 Days Of Motörhead to help us both with our office playlists and tribute. In this issue he reminds us of the many albums, live recordings and rare tracks that the ‘Head have left as their legacy.

The news of Lemmy’s passing from cancer still sinking in, I got the boost I needed from Big C survivor Vivian Campbell, who even when discussing the passing of his bandmate from the same disease, remained ever hopeful about his personal battle. We also spoke to Mourning Beloveth, Saxon, Purson, Ketzer and so many more bands in this issue who reminded us that Motörhead’s spirit lives on.

Featuring in depth interviews with Michael Schenker, Mama’s Boys (who had their own tragedy at the hands of the wretched cancer) and a trip down the memory lane of the East Midland’s heavy metal scene of the ‘80s with Hell, Sabbat and Wytchfynde, as always with the bands featured in Iron Fist they have taken that punk-soaked power of Motörhead into their own arsenal, while some have taken Lemmy and co’s attitude while forging down their own musical path. However, no matter who we featured in this issue, what it proved was that we can mourn Motörhead, we should mourn Motörhead but that what they gave us was eternal, and that is inspiration.

Iron Fist #17 is available on our online store