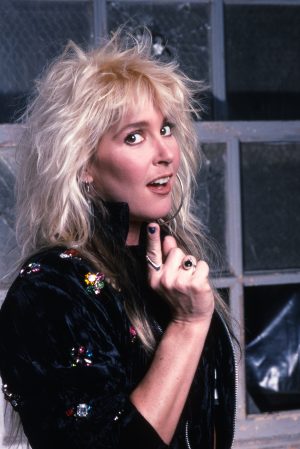 Having already released her hot and heavy memoir ‘Living Like A Runaway’ (which you’ve probably heard of already, no?!), you can now buy this F.I.N.E ’80s archival recording, which is jam packed with raunchy riffs, sultry melodies and sexpot vocals. Released on Steamhammer / SPV, available on Digipak CD and for all you Lita die-hards, blue vinyl.

Okay, so what’s the story behind the album; basically Lita found a shitload of 24-track analog tapes in the closet of her Islands home (which she’d forgotten about), packed them into a suitcase, brought them back to the US, baked then transferred them to digital, didn’t change a note and only remixed the tracks.

The ‘lost’ recordings are a sound portal into what we can only imagine it would have been like to get loose and jam with musicians such as Gene ‘Dr Love’ Simmons, ex-husband/ W.A.S.P guitar Chris Holmes and Rick and Robin from Cheap Trick – amongst other ’80s high flyers also featured on ‘Time Capsule’.

On my first attempt to interview Lita some guy from one of those guitar mags also appeared to be on the line, kinda annoying but fuck it, that just gave me another half hour to get my shit together and process the fact that I was going to be interviewing my favourite Runaway!

Half an hour later…..sounding as spunky as I’d always imagined, Lita and I got down to the ‘nit and grit’.

C’mon and poison me.

How are you Lita?

You’re back on the road, how’s it feel?

Everything’s going great. We’ve got a great band and some really good shows coming up. I prefer bus tours, right now we’re on an airplane and I’m not liking the plane so much.

Have there been any crazy fans this tour, anyone made any fun requests?

All the time (Lita’s earring gets caught up in her hair and cell, girl troubles eh). Well, I got an offer this morning to go drag racing in Vegas. Sounds pretty dangerous. 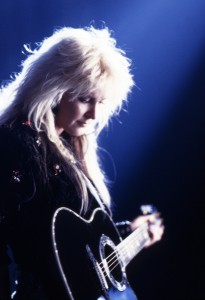 I’ve heard you mention before in an interview that vintage guitars are like vintage cars, what would that make your first guitar, the chocolate brown custom SG that you apparently paid $350 for?

Yes they are. My first guitar, if it was a car, to me, back then it was a Lamborghini or a Ferrari, an Italian sports model.

We agree on old/new cars so at this point I continue to waffle on to Lita about muscle cars and how dreamy Trans Am Firebirds are! Dreams and Machines huh…. You’ve always had the best spandex, leather and heels in rock ‘n’ roll, who inspired your style – from the Runaways to the wild solo Lita looks?

It was Neil Merryweather. I don’t know if you know who that is. He made the first suit I wore, the very first g-string but from that point on he didn’t make anything like that. He got me started. 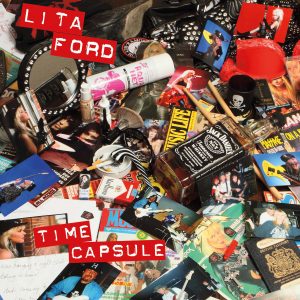 Lets talk about the new album ‘Time Capsule’, you produced it and it also features some of my favourite rock n rollas, tell me a little about the tracks and the artwork?

The tracks were written in the ’80s of course and it was something we put together for fun. It wasn’t written to be released as an album. It was just pure going in, writing some songs, recording and messing around. As you can hear on one song, we are messing around. We started bringing in other musicians that really made these songs amazing like Rick and Robin from Cheap Trick [ed: Rick and Robin from Cheap Trick feature on the track ‘Killing Kind’]. Oh man, they made that song, you know? Without them on that song it’s nothing like that.

So, the album conveys the raw excess of living in that period of rock ‘n’ roll, the characters and hanging out and jamming?

Yes, that’s what it was. That’s exactly like it was.

Many of your current fans including myself missed out on the ’80s, therefore do you see this album to be a true representation of what we imagine to be the ‘High times’ for all the musicians involved on the recordings?

At that time they were in their prime. It really is a little piece of rock ‘n’ roll history.

The clusterfuck of snapshots and miscellaneous tools of the trade on the ‘Time Capsule’ artwork feels really appropriate to the concept of the album and also gives fans a sneek peek inside the studio and the era…..

Cool, yeah, it’s all original from the ’80s, everything except the Aquanet hairspray and the bottle of Jack Daniels. Everything else in the photograph is a really authentic ’80s photograph. Rodger Carter took the snapshots on the sleeve.

It’s cool that nothing was fixed, covered-up or changed on the album, it gets really boring hearing overproduced, slick recordings these days….

I agree. Yeah, I agree with you. I think a lot of music today is over-digitalised, I guess. You don’t want it to be perfect, you want the second version to be different from the first version, instead of cutting and pasting everything.

What does Lita get up to when she’s not shredding; tell me something a fan might not know about you?

Well, what do I like? I light candles, I’m very much into different smells, you know something that smells good. I like the glow from the light. I like to turn out the lights. It makes me feel good and also smells good. The smells make me feel good. I guess you could say I’m a smelly person.

I can imagine it was rough coming up in the ’80s dealing with Sex, Drugs and Rock ‘n’ Roll, did you just go with the flow or always feel you were pretty grounded?

I always go with the flow. You have to!

There are a lot of male musicians who have a very sexy stage persona, which of these guys, who you’ve hung out with live, up to this?

They all do. No, it’s two totally different animals. Some just aren’t as sexy off stage as they are on stage. Oh boy, Nikki Sixx, a lot of girls seem to like Nikki Sixx.

He used to cut your hair right?

You guys worked together on ‘Lita’ …..

We did. We wrote ‘Falling In And Out Of Love’. He didn’t record on it but he helped me write it.

Is the morale of the story not to date guitarists?

Well, guitar players, actually band members, they all have their different personalities, like there’s the lead singer mentality, there’s the keyboard player mentality. Then you’ve got the drummer mentality, everybody’s got their own thing going on. Guitarists are the finicky ones of the bunch. I think that Chris was the exception for the rule.

I thought I heard ‘snakey’ instead of finicky ha! I love this… I read in your book that your Mom made all your friends sandwiches at your sweet sixteen so they didn’t get wasted, can you see yourself doing the same? 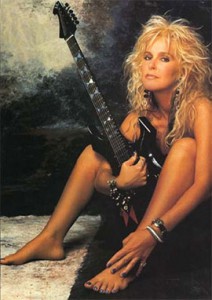 Of course. I am my mother basically. Kim Fowley, before he passed away, he looked at me very closely in the eye and said, you’ve become your mother and I said, thank you because she was beautiful, she was a lovely, lovely woman and if you knew her that was a huge compliment.

Kim, from what you read, didn’t seem too hot on compliments….

Lita, fill in the blanks:

I haven’t brought him up yet, Tony Iommi is…

Last question… ‘No Remorse, No Regrets’ were the words of Lemmy, what’s your motto?

FUCK ‘EM IF THEY DON’T LIKE IT! (Lita laughs out loud)

I thank Lita for her patience and apologize again for being that girl at her LA book signing who wanted a different page to everyone’s else’s signed. Sorry Lita!

I tell Lita she can now be released…she starts singing PLEASE RELEASE ME, LET ME GO…….