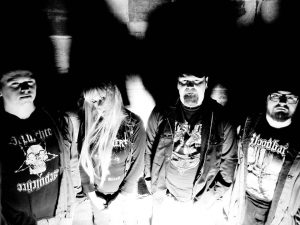 SHEER TERROR
Because their ‘Just Can’t Hate Enough’ album is one of my fave HC albums of all time and probably my favourite NYHC album. A lot of metal bands would love that totally fierce Celtic Frost style guitar tone!!

GRAVE
I’ve loved this band since the early ’90s when I was a teenager starting to discover death metal and starting to delve deep into the abyss that is the underground death metal scene. But I’ve never seen them live in person, so Temples will be my first time.

VICTIMS
I haven’t seen these guys live since 2009 but they are such an energetic live band, and their new album ‘Sirens’ is totally awesome so looking forward to checking out some new material in a live environment through a huge PA!

MELVINS
I’ve been a huge fan of their older stuff since my younger brother turned me onto them properly in the early to mid-’90s via ‘Houdini’. It’s my 40th birthday on the day they play so seeing them live for the first time on that day is a pretty sweet birthday present!

DEATHRITE
One of the newer bands on the bill and I am really looking forward to seeing them live. Their latest album is an awesome aggressive aural attack of raging crusty death metal, which ticks all the right boxes for me!