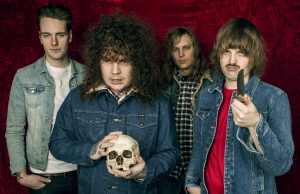 “We were formed after a wild halloween party in late 2011. Karlsson [vocals/guitar] had a couple of songs recorded that I thought sounded cool and suggested that we rehearsed them to see how it all sounded with a full band. We met at a garage the next day hungover as hell and that’s it.”
Tobias Augustsson is explaining how garage rock, horror punk, biker exploitation movie, booze hounds The Dahmers came into being. Last year’s debut ‘Demons’ twists The Stooges, Misfits, Thin Lizzy and Motörhead with fellow Swedes The Hellacopters.

“We have always listened to a lot of different music so we never decided that we should stick to one kind of genre or try to sound just like a specific band,” Tobias says of their pick ‘n’ mix punk rock sound. “The basic idea was to play loud and have a good time while doing so. We find inspiration in everything from old punk and ’70s rock to ’60s pop songs and much more.
“There has always been bands around that aim towards sounding old school and that’s usually fine and we dig a lot of them as most of our favourite bands are old bands,” he continues of his homeland’s revolving door of vintage sounding bands. “However it can also be boring as hell when a band tries to imitate something and ends up as a clone. We don’t necessarily believe all bands should strive for originality but there should at least be some kind of individuality to keep it interesting. But good songs are always good songs no matter if it’s new or old.”

Ready to release their new EP ‘Blood On My Hands’ along with a new “terrifying music video”, the band have warned that “We’re currently recording our next album and we have some upcoming shows this fall/winter.”

One thing is to sure of, and that’s their mode of transportation for the upcoming tour. Using a lot of biker imagery, we wanted to know what they rode but the band were quick to put things right. “They are the ultimate freedom machines and go very well in hand with rock music but we only rode bikes once when we were really drunk at a party, unfortunately. Actually it is probably more fortunate since putting us on bikes would be dangerous for everyone. We were really inspired by old biker movies when we recorded the ‘Terror On Wheels’ EP and the front cover is a photo of our lead singer from the mentioned party. We also sing a lot about serial killers but that doesn’t mean we actually go around killing people.”