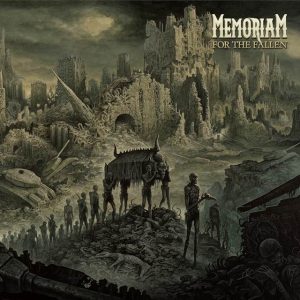 “The season itself lost in a timeless void. The figures appear as remnants of once soldiers, now strange in their gathered mass. Drawn forwards by the drifting momentum of the procession. Unaware of their emaciated state they follow the commander. The Commander’s elongated appearance is tattered and almost creature like, with the combat style elements and gas mask falsely presenting as a costume. The procession appears almost ghost like, ancient and serene, slowly moving through this eerie place as if forever. Far in the background there might still be a war happening, but perhaps in another time. As we view a sub level of reality, lost in the present, captured in light, where the war had passed through and we are left in a ghost biology. Where chemicals and history meet to create an inescapable surrealism.”

To give a first taster of what to expect from this highly-anticipated record, the first single from ‘For The Fallen’, ‘Reduced To Zero’, has been launched by the label (see below).

Vocalist Karl Willetts (formerly of Bolt Thrower) explained: “‘Reduced To Zero’ is a comment on the times that we live in. In a world that is dominated by fear, hatred and intolerance, the song is a direct result of Brexit and Trump and the general rise of right wing nationalistic xenophobia.”