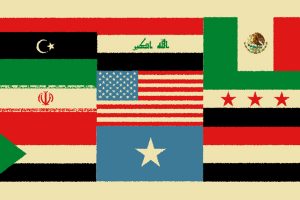 THE ORDER OF THE SOLAR TEMPLE (CANADA)
Soundtracking a new era of Satanic Panic, Matt Emery told us in Iron Fist #16 that “All I can say is that I wear my influences on my sleeve. It’s both a blessing and a curse, there’s a lot of ‘70s influence. The proto-metal, hard rock and prog that emerged from the tail-end of the ‘60s psych movement is some of the most inspiring, heavy music to me.” We couldn’t get enough of this band when we first discovered them and their debut, self-titled album is available to buy on I-Voidhanger’s Bandcamp page.

HEAT (GERMANY)
There’s this guy on Bandcamp called Paul Rote who likes all the same bands we do. In fact, we kinda stalk him because he’s always SO on the money. Anyway, he said of Heat, they’re “one of the best retro acid rock bands,” and he ain’t wrong. Following in Kadavar’s footsteps, Heat (featuring members of Samsara Blues Experiment) are for fans of Jersusalem, Sabbath and Purple and worth checking out.

DOOL (NETHERLANDS)
Featuring members of the much-missed The Devil’s Blood, of course Dool were going to be under our watchful eye, and we were so thrilled to get a sneak peak of their newest album ‘Here Now, There Then’ on Bandcamp a few weeks ago. Gothic, psychedelic and drenched with introverted doom-like melancholy that feels oddly apt right about now.

CHURCH OF THE COSMIC SKULL (UK)
Those organs! This is a church we want to attend. A church, we should add, that wouldn’t turn back the clock 50 years on human rights, women’s rights, LGBT rights… we could go on! We’ve barely stopped playing this since we discovered this English hippy cult on Bandcamp late last year. The soundtrack to the new revolution!

SOURCE (SWEDEN)
Of course we’re obsessed with this demo streaming on Bandcamp as of December 2016. It features members of RAM, Portrait and sounds like, well, all the bands you always said RAM and Portrait sounded like (ahem Priest ahem Fate ahem Jake E era Ozzy).

DON’T DROP THE SWORD (GERMANY)
The great thing about Bandcamp is if you see a review by someone that you agree with you can see what else they’ve given the thumbs up to. That’s how we found the badly-named Don’t Drop The Sword from Bavaria. It’s the kind of name you have to press play on. Glad we did, this appeals to the early Blind Guardian fan in all of us. Beware the Bandcamp rabbithole.

ANGEL SWORD (FINLAND)
Their artwork is Heavy Load level terrible, and that is part of their charm and why we dispatched our very own Magda Medved to interview these Finns when we heard this new album on Bandcamp a few months ago. They told her “some bands that definitely influenced our music are Heavy Load, Accept, Judas Priest, Running Wild, Manowar, Angel Witch, Twisted Sister and Diamond Head”. Sign us up!

CARONTE (ITALY)
Citing Danzig, Coven, Black Sabbath, Electric Wizard, Candlemass and Cathedral as influence, Caronte recently told Andreas Andreou (for a forthcoming issue of Iron Fist) that “magic, sexuality and drugs were all themes we wanted to touch in our musical project”. That sounds good to us. Out now on Van Records, newest album ‘Codex Babalon’ is up on Bandcamp for all.

ETERNAL CHAMPION (AMERICA)
Finally, a band we can’t shut up about, and we’re not the only ones. This rightfully hit a few Best Of lists in 2016 and producer Arthur Rizk has family from one of the banned seven – and once made me some sweet Lebanese breakfast – so this is our middle finger to barriers and borders and unconstitutional discrimination. Fuck you Bannon, Trump and Pence – from all at Iron Fist!