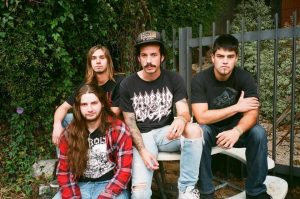 When your vocalist sounds like a young Martin Van Drunen and you ask legendary designer Dan Seagrave to do the artwork for your debut album, the message is pretty clear, isn’t it? Try to tickle Rude’s guitarist and frontman Yusef Wallace by stating that their debut album ‘Soul Recall’ is “a classic death metal sounding record stuck in 1991” and he’ll answer: “I guess that’s a compliment. I’d have to say most anything from 1995 onward, until the last couple of years, sounds like crap, so I’d rather be on the good side of things.” Formed in 2008, initially Rude had a thrashier vibe and even switched monikers to suit their more straight-forward and primitive sound, calling themselves Forsaker. But after one self-titled demo, they turned back to both their initial name and a more death metal direction. “We still have that thrash aspect in our music but with a different second guitar player and we’re now tuned down half a step,” Yusef admits. “I like that genre still, not the corny stuff though, but I don’t think it’s what makes us different. I’m leaning more towards us playing death metal in E flat. I do like listening to bands in … Read More