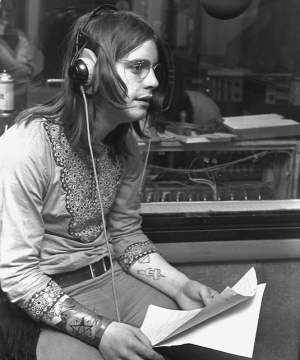 NYC noise duo Uniform have gotten into the Halloween spirit by trick or treating (depending on where you stand on their take on the Gods) us with a cover of Sabbath’s ‘Symptom Of The Universe’.
Taken from their brand new 12″ ‘Ghosthouse’, out via Sacred Bones Records, their version is a tad more bleaker than the “summer skies of love” of the lyrics.

This one came out of the leftfield, as who knew trip hop chanteuse Beth Gibbons from Portishead would lend her ethereal charm to Sabbath’s self-titled classic so flawlessly. But back in 2014, Bristol-based doom trio Gonga not only convinced her to collaborate with them on this beautiful cover but got to use a wonderful pun-based titled for it too.

That damn 1990; traditional heavy metal was seen as passé and no one was paying attention to the genius that is ‘Tyr’. Everyone was too busy getting to industrial metal and growing dreadlocks and listening to Front 242… oh wait, that was just my friends. But Ministry’s Al Jourgensen knew what was up and him and his mate Trent from Nine Inch Nails paid homage to the Gods in the only way they could. Jesus didn’t build your hotrod, but he did write that riff!

The Black Sabbath love was continued in 1992 by Earache Records, who got together some of their extreme metal roster to pay tribute to the Brummie legends on a whole album of Sab covers. You’d expect Sleep and Cathedral to be all over it, but some of the best, and most surprising, songs on this comp come from the likes of Brutal Truth, OLD and Godflesh. When put to the vote at Iron Fist HQ it was decided that Godflesh’s ‘Zero The Hero’ just pips Godspeed’s ‘Sabbath Bloody Sabbath’, even if that does feature Brucey D on vocals!

Why hasn’t anyone done a heavy dub take on Black Sabbath asked one of our writers when discussing this list. Well, have you heard Canada’s breakcore veteran Venetian Snares do ‘Electric Funeral’ back in 2007?

With its occult undertones and ominous bells, covering this is a no brainer for ritualistic Greek black metal tyrants, Rotting Christ. Black Metal Sabbath suddenly makes so much sense…

Repeat! Repeat! Is it possible to better a Black Sabbath original? Maybe not, but this is close and proves just how much soul those four godfathers of heavy metal had running through their veins. This is perfection.