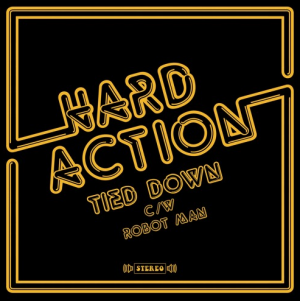 If you’re inspired by the three ring rock n roll circus of the ‘head, missed the last bus home like Lynott, live your life on Permanent Vacation, chill out to a bit of jazz, cool down with the blues, rev it up with some sleaze, are born to be wild and walk on the wild side, then you belong in our pages and over the next few days we will be highlighting some of the bands we think will take 2017 by the scruff and take it down a dark alley for a kicking.

HARD ACTION from Finland are that such band, and to kick off this series they’ve granted us an EXCLUSIVE FIRST listen to their newest single ‘Tied Down’, which will be released via Svart Records on vinyl and digitally on February 24.

Just to make us ache for it even further, the single will be backed by a cover of Scorpions ‘Robot Man’. Featuring half of Finland’s speed metal merchant Speedtrap, Hard Action are their sleazy, hog-ridin’, hard drinkin’ counterpart and this single comes on the trail of their 2015 debut ‘Sinister Vibes’.

If ‘Tied Down’ is a glimpse of what’s to come then we’ll get the rope.