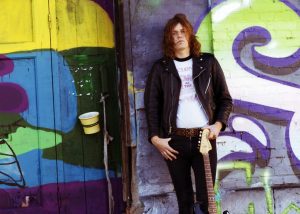 I recorded the solo record in between Spiders albums, it was a chance to try out something new.”

It’s also the first time the guitarist will bring his gruff London-accented snarl to the mic. The inspiration from that comes from a dusty corner of British rock history. “Growing up all my friends that were singers in bands were trying to sound like Rob Halford or Ozzy Osbourne and I could never do that,” he tells Iron Fist. “So when I first heard the Larry Wallis song ‘Police Car’ I thought this is a song I could sing. I was born in London but moved to Sweden when I was eight and when I heard ‘Police Car’ it sounded like where I was from. I always thought Larry Wallis was so cool with his long, big hair and leather jacket in the age when everybody else was shorthaired punks.”

For those who need a recap Wallis was best known as the frontman of Pink Fairies, but also racked up stints in UFO and Motörhead. ‘Police Car’ was a 1977 single from his days as in-house producer at Stiff Records, the influential punk label behind The Damned, Ian Dury and The Adverts. John’s interpretation of this seminal British punk classic, which he kindly let us have first dibs on, is featured on his debut album ‘Night Flight’ out via Crusher Records on February 24. The first pressing is limited to 500 LP’s on black vinyl and 50 cassette tapes